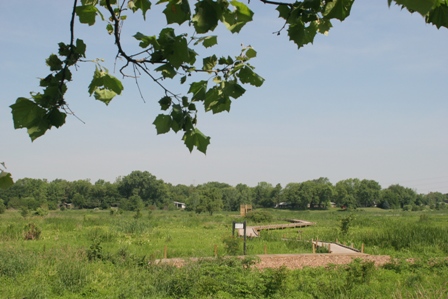 Park Forest began the process of restoring a 45-acre wetland site at its Central Park in early 2000. This site is unique in that it is part of a 90-acre park site and sits in the very center of the community.

Early 50s
Central Park was dedicated to the Village by the original developer of Park Forest, American Community Builders. In the early 50s, residents described the north 45 acres of the park as a swamp. Early photos depict patches of open water and numerous birds, ducks and other wildlife. Soil borings indicate peat soils as deep as 36 feet in some sections of the site. The soil type is composed 100 percent of Muskego and Houghton Mucks (903), which is considered a wetland soil.

Early 60s
In the early 60s this area was improved by the installation of over 26,000 linear feet of drain tile. The site was graded and seeded to turf grass, a typical practice during that time. This area was mowed on a regular basis for over 20 years. During this time several proposals were put forth for the use of this section of the park. Ideas included development of a recreational lake, soccer or baseball fields, and a golf course. A referendum for development of a golf course was defeated in the mid-60s. Uncertainties over the soil stability prevented any of these ideas from being implemented.

Early 80s
By the early 80s, rough terrain, the high cost of maintenance and a new sensitivity to the environment resulted in mowing only a few times each year. While the drain tile system still functioned, many new forms of vegetation would emerge. During the early 1990s Village officials began to discuss restoration of the wetland as possibly the best treatment of the 45-acre parcel. In 1999, the South Suburban Mayors and Managers Association’s Stormwater Strategy Committee selected the Central Park site as a Watershed Demonstration Project. Through this selection, an Environmental Consulting Firm was retained to prepare a wetland restoration site plan and management plan for Central Park Wetlands.

Continuing Restoration Efforts
The Central Park Wetlands is one of the gems of the Village’s parks. A restoration project that began as a dry grassy area in 2000 has blossomed into a biologically diverse habitat of over 140 native plants and myriad species of birds. Unfortunately, over the last few years invasive plants such as Cattail, Canadian Thistle and Tall Reed have gotten a foothold, limiting some of the valuable bird habitat. Through a generous grant from ComEd in 2012, the Village has been working to regain control of this invasive vegetation, broadcast seeding and planting sets. This grant allowed the Village to purchase $5,000 worth of native seed mix, suitable to this site as well as the plants that were planted. Moving forward, the Village has been following an Ecosystem Enhancement Plan that includes mowing, some controlled burns and water level management to keep the invasive vegetation under control and maximize the bird habitat. Although the beautiful flowers and tall grasses haven’t been as showy during this time the end result will be a true sedge meadow. Even with the ongoing habitat restoration project, residents can still enjoy an evening walk and perhaps be scolded by a Red-winged Blackbird for being too close to its nest or see a Killdeer play-acting a broken wing.