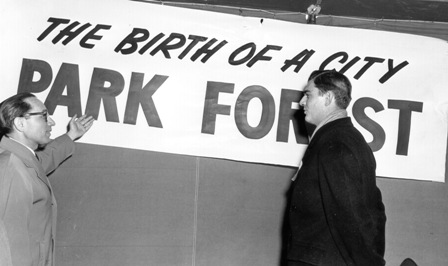 Park Forest began life in 1948 as a plan to provide housing for GIs returning from World War II. It was the first post-war planned community, and its innovative design has been recognized and used as a model for towns throughout the world. The Village of Park Forest has received numerous livability citations, including two All-America City Awards, two Governors Hometown Awards, and the Burnham Award for excellence in planning for its downtown redevelopment, in 2007 was named one of America’s Most Livable Suburbs by Forbes Magazine, and, in 2014, was ranked third in the nation in affordable housing by Business Insider.

Located approximately 30 miles south of downtown Chicago, Park Forest (population 21,975) is part of both Cook and Will Counties. It is bordered by Chicago Heights, Matteson, Olympia Fields, Richton Park, and University Park. Interstate Highway 57 is less than three miles to the west, and the Calumet Expressway, eight miles to the east, provides access to all of the major highways in the Chicago area. Both Midway and O’Hare airports are less than an hour away. Park Forest residents have easy access to three Metra commuter rail line stations. Metra trains make 80 daily trips to downtown Chicago. During rush hour, this trip can take as little as 50 minutes.

Park Forest’s first homes were multi-family rental units for the returning servicemen. Many of the early rentals were later converted to housing cooperatives, but a large number remained rentals. The Chicago Sun-Times recognized Park Forest as a leader in affordable housing and Chicago Magazine as a "great neighborhood."

Housing Over the Years

During the early 1950s, thousands of small single-family "starter homes" were built. Later, a third building surge saw the production of larger, two-story homes, some with four or five bedrooms. But for nearly 40 years, Park Forest remained a somewhat transient community. Families who sought larger, move-up homes had to look elsewhere. In the late 1980s and early 1990s, the Village encouraged the development of larger housing to round out its housing stock. Today, of the nearly 9,600 housing units, about 5,700 are single-family homes. Another 3,880 are multi-family units, of which almost 2,000 are cooperatives. In addition, scores of original starter homes have been enlarged over the years to fit the needs of today’s homeowners. 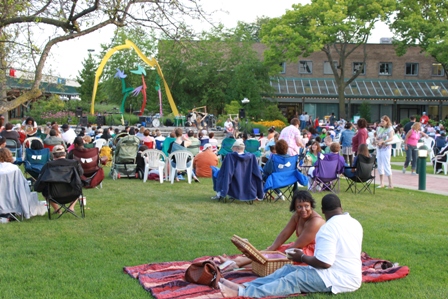 From its inception, Park Forest was one of the few communities without restrictive covenants. Although pioneer residents represented religious but not racial diversity, within ten years of incorporation, the Village began a Human Relations Commission, adopted a Fair Housing Ordinance, and actively sought racial diversity. The Village did not follow the pattern so prevalent in Chicago’s neighborhoods and suburbs of white flight and racial resegregation. Today, Park Forest is comprised of residents from all backgrounds and celebrates the rich diversity of the community. With more than 19 places of worship and a nearly 50-year commitment to fair housing, all ages, races, and religious groups call Park Forest home.

The 2,000 acres of parks, recreation facilities, and open land put Park Forest among the largest per capita in Illinois. In addition to numerous playgrounds, ball fields, and picnic facilities, the Village contains an abundance of tennis courts and is home to one of the most popular outdoor swimming complexes in the state. The Village’s pioneers planted trees in both parks and along the Village’s developing road system. The urban forest has now matured, along with the Village. Today, despite the challenge of maintenance, it provides an enormous asset to the Village.